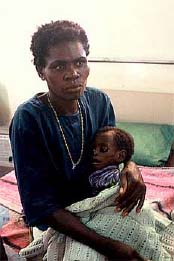 If we look to sound bites or sensational scenes on network TV, the above objectives will not be met. What is needed is a combination of sources, and searching the Internet for information is essential. What is also required is time -- time to read, search the web, and analyze.

This article focuses on AIDS in Southern Africa. The References listed at the end are highly recommended. After researching this topic from various media sources, the best study I found was on the WEB -- a document jointly produced by UNAIDS, UNFPA and UNIFEM entitled, "Women and HIV/AIDS: Confronting the Crisis."

Globally there are now 17 million women and 18.7 million men between the ages of 15 and 49 living with HIVAIDS.1 The numbers may be far higher -- but ignorance and lack of reporting the disease due to fear or shame prevent people from being tested.

The majority of people with AIDS live in developing countries. Of all regions, sub-Saharan Africa is the most devastated. Every day, 6,000 people in this region die from AIDS. 11 million children under 15 have lost at least one parent to AIDS. About a third of those have lost both parents. 2 77% of all HIV-positive women live in Southern Africa. 3 In South Africa, one out of every nine are HIV positive -- 5 million people.

The Meaning of Numbers

The numbers above mean that many families are made up of children only. Here is a description of one such family:

The "children reel from crisis to crisis. Life is very difficult…No food, no clothing, no bed covers. We have to struggle." This is the description of Jose Nhambo, a 17 year old in Cemento, Mozambique, who is trying to care for his younger brothers because his parents have died from AIDS. "Three-year-old Fatima died in early December, perhaps from AIDS, perhaps from malnutrition. Five-year-old Joao, infested with worms that have reduced his toes to red stumps, can walk only on his heels. His 7- and 9-year old brothers…are covered with sores from scabies mites, which infect the entire family." Jose's sister, Maria, 16, "…dropped out of school to care for her sick parents, became pregnant by a man whom she refuses to identify." 4

Their half-built shelter of stones and sticks on the bad side of a poor village has no walls and a single chair for furniture. They get their water from a single hand-pumped well that serves 600 people.

Southern Africa is increasingly home to children like the Nhambos, robbed of their childhood by AIDS and staggering under adult-size hardships." 5 "It is not clear how some of these children survive from one day to the next," said Antonia Charre, director of an agency that serves women and children in Sofala -- where the Nhambo children live.6 Many are reduced to begging for food from neighbors.

"Orphans are more likely to drop out of school, to suffer from chronic malnutrition, to live on the street, to be exploited by adults, to turn to prostitution and crime, and to become infected with HIV, the virus that causes AIDS." 7

Human rights violations (primarily against women), and gender inequalities are driving the worldwide AIDS epidemic. AIDS used to be thought of as a disease that afflicted primarily men. However, nearly half of the people who have AIDS are women. "In sub-Saharan Africa, 57% of adults (13.1 million) with HIV are women, and young women aged 15 to 24 are more than three times as likely to be infected as young men." 8

In Africa, as in other parts of the developing world, there is a culture of silence surrounding sexuality and reproductive health. Because of this, many young women in Africa and other regions may not know how AIDS is contracted.

Women throughout the world face sexual violence, which makes the admonition for abstention as an AIDS remedy irrelevant and cruel. Gender inequality condones men marrying very young wives. Often the men have multiple partners -- whereas women are expected to be faithful to their husbands. Women are intimidated or threatened if they request that men (their husbands also) use condoms before sex -- so they are unprotected.

It is women -- not men, who are expected to care for relatives who have contracted AIDS. "A rural women interviewed in Southern Africa estimated that it took 24 buckets of water a day, fetched by hand, to care for a family member who was dying from AIDS." 9

Lack of education and the resulting poverty contribute to women contracting AIDS. " Without resources, women are susceptible to abuses of power."10 Women who are unable to earn an income turn to sex work out of desperation.

In many countries, there is a lack of political will on the part of governments for the rights of women for education, health and property. Women need access to credit and marketing skills to escape from the cycle of poverty and exploitation. 11

"Education is the key to fixing the ills of Africa," states Nicholas D. Kristof of the New York Times, in one of his poignant and enlightening multi-media reports about Africa.12 "Education is key to an effective response to HIVAIDS…Universal primary education is not a substitute for expanded HIVAIDS treatment and prevention, but it is a necessary component that complements these efforts." 13

"New analysis by the Global Campaign for Education suggests that if all children received a complete primary education, the economic impact of HIVAIDS could be greatly reduced and around 700,000 cases of HIV in young adults could be prevented each year --seven million in a decade." 14

If schools are safe (often they are not -- especially for girls), they can:

--Provide a way out of poverty by teaching skills that lead to intellectual and economic independence.

Since often the public sector is dysfunctional, it is up to independent groups to make a difference. Perhaps the West could use their money most wisely by supporting indigenous initiatives such as the ones contributing to Uganda success, and/or supporting western-founded organizations that are making a difference such as Playing for Peace, Paul's Computer Institute, and The Business Council for Peace.

"Uganda's massive decline in HIV infection is attributable to communication about AIDS within social networks and personal knowledge of someone with AIDS…A study (in the journal Science) reports that the number of HIV-infected positive Ugandans has fallen from 1.5 million to 500,000 in the past decade -- a success rate equivalent to a vaccine of 80% effectiveness. These findings should encourage a re-think of global HIV and AIDS intervention policies…17 The social networking lead to abstention -- a combination of communication and condoms. 18 The UNASO (Uganda Network of AIDS Service Organizations) has also been effective as a forum for coordinating and networking of AIDS organizations. 19

Playing for Peace Basketball in 5 years has taught the game of basketball to over 25,000 children in South Africa (and in Northern Ireland). It works to break down racial barriers, and partners "with professional organizations that facilitate workshops in conflict resolution, HIV/AIDS awareness, education and health issues." 20 It was founded by two American brothers: Sean and Brendan Tuohey and another friend. It is based in Washington, D.C.

Paul Mickelson, a retired American firefighter from Beloit, Wisconsin, invested his retirement pension to start Paul's Computer Institute in Bamenda, Cameroon in 1997. It provides: "Professional training in computing, Data Processing, Hardware/Software Maintenance, Repairs, and Networking." 21 Beginning with a staff of 3 and a few students, it now has a staff of 35 and a student body of over 300. It is supported by the Friends of PCI, a non-profit organization in Wisconsin. 22

The Business Council for Peace, a UNIFEM (United Nations Development Fund for Women) partner, helps "women in regions of conflict and post-conflict build businesses to sustain their families and strengthen their abilities to foster peace." 23 They have helped women develop businesses in the Middle East, Afghanistan, and Rwanda. In Rwanda, they helped a village of "previously warring (Hutu and Tutsi) tribes" to be self-sustaining by "weaving baskets for the US market." It became Rwanda's "second largest export during 2003/2004." 24 "A sales of one basket feeds a family of four for a month." 25

The G8 Summit recently pledged $25 billion a year of development assistance to Africa by 2010. As we have seen with Tsunami aid, however, often the amount pledged and the amount that actually reaches victims may be quite different.

Some media organizations will focus the world on those who are able to terrorize the west, rather than on the poor who are suffering in Africa. But responsible media organizations will continue to report about AIDS sufferers in Southern Africa, and in other parts of the world. The stories will encourage the responsible action and compassion of people like Paul Mickelson and Sean Tuohey. And perhaps, the reports will help us to see that when others suffer, wherever they are and whatever the cause, we suffer as well.

12 Is There Hope for Africa? Nicholas D. Kristof, 3/24/04 http://www.nytimes.com/pages/opinion/index.html

Note: You can listen to programs about Playing for Peace Basketball and Paul's Computer Institute by accessing Jerome McDonald's Global Activism Series on Worldview from Chicago Public Radio.