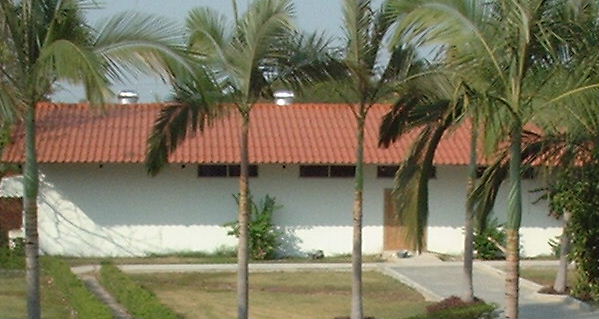 As I begin this article it is 10:00 in the morning and the red line on the thermometer outside my window reads 97 in Fahrenheit and 36 in Celsius. This is Thailand's hot season and even sun-loving pale faces who have escaped here from more northerly reaches start to look for shade from their friend. To try to work in this heat seems almost unthinkable. So in any "developed" part of the country the hot air on the streets of the city is pumped up even hotter by the thousands of office and room air conditioning units dumping their waste heat into the already overheated environment.

Fish Enterprises came to Thailand in 1990, so our experience of coping with the hot conditions is relatively recent. People have been living in these sort of conditions for thousands of years. One only has to look back a fraction of a percent into those thousands of years to arrive at the time when air conditioning as we know it was not an option. It stands to reason that there must have been some lessons learned apart from keeping physical activity to a minimum during the hot season. This latter certainly had its place in the people's survival, but in a world where efficiency and productivity are keys to economic growth its role is reduced as a consideration in planning a factory.

What one does see in passing through villages is that basic Thai architecture has developed differently from that in cold climates. Putting a house up on stilts has its benefit for keeping dry in floods, which is a consideration in a country with a five to six month rainy season. But also sitting under the house in the heat of the day where the slightest cooling breeze is not blocked by walls and where the sun's beating rays are taken by the roof and walls with the insulation of the interior and floor was certainly cooler than most other alternatives. The traditional Thai house is more likely to have wooden shutters than glass windows which keep out the sun when closed but let the breeze flow through when they are open. The Thai word for evening is "yen" which means cool, because, of course, that is when the sun has gone down and a light breeze starts blowing. Then to put a cap on it all, the village is all shaded by trees which are one of the best natural air conditioners around.

Did the lessons of Thai architecture then have any value for us? We were in a position where we needed to add a building. Our purpose was to upgrade and improve the efficiency of our stamping division. We could have planned it to be air conditioned and add to our electrical consumption and increase our overheads more. But in our experience, besides the extra cost, that is not always the best option. But if we were not going to use air conditioning we realized that we couldn't just leave the inside working environment to chance and that was where we could take some lessons from the Thai experience. 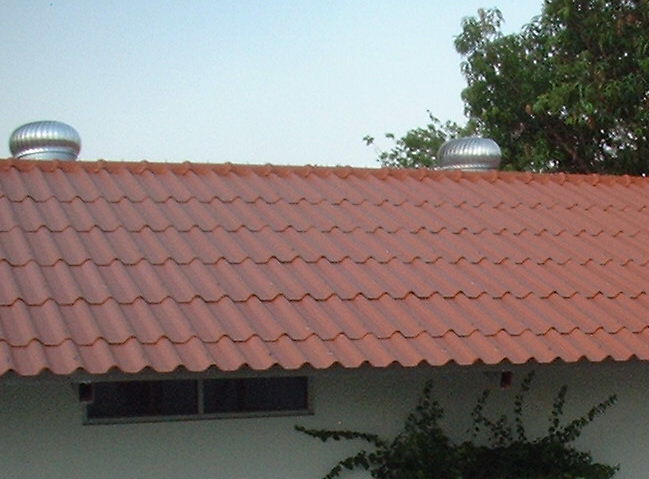 But speaking of Thai architectural experience there are two streams here. One is the millenniums-old stream that you see in the old Thai houses in villages. The other is the last-few-decades stream which you see in the thousands of cement shop-houses and cheaply built dormitories and, indeed, most of the current building construction that goes on. It is not that the one has value and the other not. But a smart builder can learn from both.

We've spoken of the natural cooling that the millenniums-old stream teaches us. The LFD (last-few-decades—sorry for another 3 letter acronym) stream has shown that houses and buildings can be built quickly, cheaply, relatively durably, and, with effort, attractively. For cost, material availability, maintenance and industrial use we are more or less forced into the LFD stream. But could the LFD approach achieve our building objectives?

Our whole reason for building was to add efficiency to our manufacturing, and one of the main reasons for not installing air conditioners is efficient use of our resources over the long term. So we want a building that is efficient to use, that is comfortable for the people working in it so they don't have that distraction, and that is proportionately or appropriately efficient to build. In the construction we see around us every day we could see what we wanted to avoid. The LFD approach was great at cost cutting that ended up with a quickly erected building that looked great, but that was either unlivable because inside it was like a furnace or that was a tremendous energy waster when attempting to cool it by air conditioning.

What Have We Done?

So, how to bring the old Thai architecture lessons into the LFD construction methods? Old Thai architecture achieved insulated shade. LFD construction closes in reinforced concrete rectangles of columns and beams with a wall of brick. By spending a little more for bricks and a little more time to lay them, each concrete rectangle could be closed with two layers of brick—an inner and outer brick wall with a space between—already some insulation. And with an investment in some fibreglass insulation to put in that inner space even more insulation.

Shade? Of course the roof, but with a long overhang so it shades the walls until well past the hot part of the day. But also insulate under the roof so that the sun doesn't get a chance to heat the interior. One could spend a lot of money there. But there is a cost effective, double aluminum foil product which reflects the radiant heat and has a thin layer of plastic between to deal with convected heat which greatly reduces the "hot tin roof" syndrome.

But what about the breeze under the house? Let's make the breeze under the roof. Here is where LFD technology has caught on to a simple product with old Thai effect. A 60 centimetre diameter vaned turbine globe that mounts on bicycle wheel bearings. The slightest breeze starts this globe spinning which then with its centrifugal effect draws air up and out of the roof. If these globes are positioned near the peak of the roof where the air is the hottest, the hot air is continually drawn out and replaced by cooler air coming in through vents under the roof.

What about windows? Ours aren't for ventilation as we have vents for that. In fact we rarely would have opportunity to enjoy the building when it is cool in the evening. But the windows provide natural light without much heat because they are situated high under the roof so they would never let in direct sunlight.

What We Can Still Do

What is still wanting are some more natural air conditioners—trees for shade and green. Hopefully we will get to that soon. And of course we will need to create a little artificial breeze inside with some electric fans, but they consume about as much electricity as a light bulb.